The Eden Project and EGS Energy Limited announced today (Monday October 14, 2019) that funding has finally been secured to drill the first well for their pioneering geothermal heat and power project.

After a ten-year campaign to bring the clean, green technology to Cornwall, the partners said that the £16.8 million in funding will enable them to start drilling on Eden’s site next summer.

Eden Co-founder Sir Tim Smit said today that securing funds and thereby the chance to spark an energy revolution amounts to the biggest leap forward for Eden since it opened in a former clay quarry near St Austell in 2001.

Sir Tim said: “Since we began, Eden has had a dream that the world should be powered by renewable energy. The sun can provide massive solar power and the wind has been harnessed by humankind for thousands of years but because both are intermittent and battery technology cannot yet store all we need there is a gap.

“We believe the answer lies beneath our feet in the heat underground that can be accessed by drilling technology that pumps water towards the centre of the earth and brings it back up superheated to provide us with heat and electricity.

“The missing piece of the jigsaw in a 24/7 clean renewable energy future is this baseload. Now we have the green light and the funding to start drilling we are determined to make this technology work. And we want to work with others all over the world – sharing knowledge and encouraging the change as fast as is humanly possible.”

The £16.8 million sum has been secured from a mixture of public and private sources. Cornwall’s final round of EU funding, the European Regional Development Fund (ERDF), has contributed £9.9m. Cornwall Council has put in £1.4m. Institutional investors have contributed the remaining £5.5m.

The EU (ERDF) funding is administered by the UK Government’s Ministry for Housing, Communities and Local Government.

The £16.8 million will pay for the first phase of the project – drilling one well, a research programme and a heat main, to prove the extent of the resource 4.5km down in the granite that lies beneath the Eden site.

This first well will initially supply a district heating system for Eden’s Biomes, offices and greenhouses. It will pave the way for the second phase – another 4.5km well and an electricity plant.

Completing the second phase will mean that Eden will be generating sufficient renewable energy to become carbon positive by 2023 as well as aiming to be able to provide heat and power for the local area.

To deliver the plan, a new company, Eden Geothermal Limited (EGL) has been formed. The EGL shareholders are:

The EGS Energy team have significant experience and expertise, having been part of the Hot Dry Rocks geothermal programme in Cornwall in the 1980s, the follow-on EU programme in Soultz-sous-Forêts, France and the subsequent commercial power generating projects in Landau and Insheim, Germany, among others worldwide. The University of Exeter will be providing academic and research services to the project.

Sir Tim paid tribute to the tenacity of the EGS Energy team and his own colleagues within Eden for enabling drilling to start and expressed huge thanks to the council, the EU and the institutional investors.

He said: “Geothermal will be a game changer for Eden, Cornwall and the UK. The heat will be used for the Biomes, to grow food, as well as helping support the development of our long-awaited hotel.

“Once up and running, our plant will provide more than enough renewable electricity and heat for the whole site, as well as for the local area. We will be drilling for good energy rather than bad.”

Guy Macpherson-Grant, Managing Director of EGS Energy, said: “It is exciting that this geothermal development is under way. The geology in the county is particularly well-suited for cost-efficient heat and power generation, and St Austell benefits from particularly high heat flows.”

Augusta Grand, Director of Eden Geothermal Limited, who has led Eden’s geothermal project for the last seven years, said: “It is great that we’re now getting going on this project. Geothermal has huge potential to provide baseload heat and power on a very small surface footprint.

“We look forward to being able to demonstrate the advantages of the technology to Eden’s one million visitors a year and encourage greater investment.”

Richard Day, non-executive chairman of Eden Geothermal Limited, said: “The support we have received from all our stakeholders will allow us to prove the resource in this part of Cornwall. Alongside the other geothermal project in Cornwall at United Downs, we are looking to stimulate a whole new Green Tech industrial cluster in Cornwall, on the back of the centuries of mining heritage in the county.”

The Rt Hon Jake Berry MP, Coastal Communities and Local Growth Minister, said: “The Eden Project is not only a must-see tourist attraction bringing visitors from all corners of the globe to Cornwall, but also an innovator at the very forefront of renewable energy development.

“Thanks to £9.9 million of Government funding, work can begin immediately on this exciting project which will unlock the rich geothermal resource beneath the site and allow the full untapped potential of renewable energy sources to be fully utilised.

“This will be essential in tackling climate change, exploring alternative energy sources and ensuring Cornwall can take full advantage of all the economic opportunities that lie ahead.”

Steve Double, MP for St Austell and Newquay, said: “Cornwall is a literal hotbed for geothermal energy and has for some time been a leader in clean and sustainable energy production. I have long championed the Eden Project’s efforts to realise the potential of this renewable energy.

“Cornwall’s unique geology enables geothermal energy to make a significant contribution to maintaining the Duchy’s clean energy credentials. It is great news that we have been able to secure funding for this scheme that fits well with the Eden Project’s vision. I’d like to thank everyone who has been involved locally in getting us to this position.”

Glenn Caplin, Chief Executive of the Cornwall & Isles of Scilly Local Enterprise Partnership, said: “This is another huge step forward in the drive to create a geothermal industry in Cornwall, using our natural assets to decarbonise our economy and create high value jobs. Renewable energy is both an environmental and an economic opportunity for Cornwall, which is why clean growth is at the heart of our emerging Local Industrial Strategy.”

Cornwall Council cabinet portfolio holder for culture, planning and economy Bob Egerton said: “By providing strong support and investing in alternative forms of renewable energy, we are leading the way in making the most of Cornwall’s unique assets to benefit our residents and businesses as we work together to tackle the climate emergency.

“Geothermal energy promotes Cornwall and the Isles of Scilly as a ‘clean growth’ region and shows that our approach to the Government’s Industrial Strategy for Cornwall is shaped around the transition to an economy that is powered by clean energy. I hope that this focus on clean energy will expand to the wider south west and to the UK as a whole. This step change will be absolutely necessary if we are to meet our ambitions for tackling the climate emergency both locally and nationally.”

Cornwall Council cabinet portfolio holder for climate change and neighbourhoods Edwina Hannaford said: “Expanding renewable energy generation is a key part of our climate change action plan so that we can ensure a prosperous and sustainable Cornwall for everyone. Eden’s pioneering geothermal plans will bring benefits to the whole community in providing clean and renewable energy to the area.”

Dr Robin Shail, Senior Lecturer in Geology at the University of Exeter, said: “Cornwall is rapidly re-establishing itself as the UK centre for deep geothermal energy and we’re delighted to be involved in this major project in which we will contribute towards achieving research objectives and training of the next generation of scientists and engineers to work in this emerging sector.”

A video of Sir Tim Smit talking about Eden’s geothermal plans is available at https://youtu.be/CrzGStYHh08. 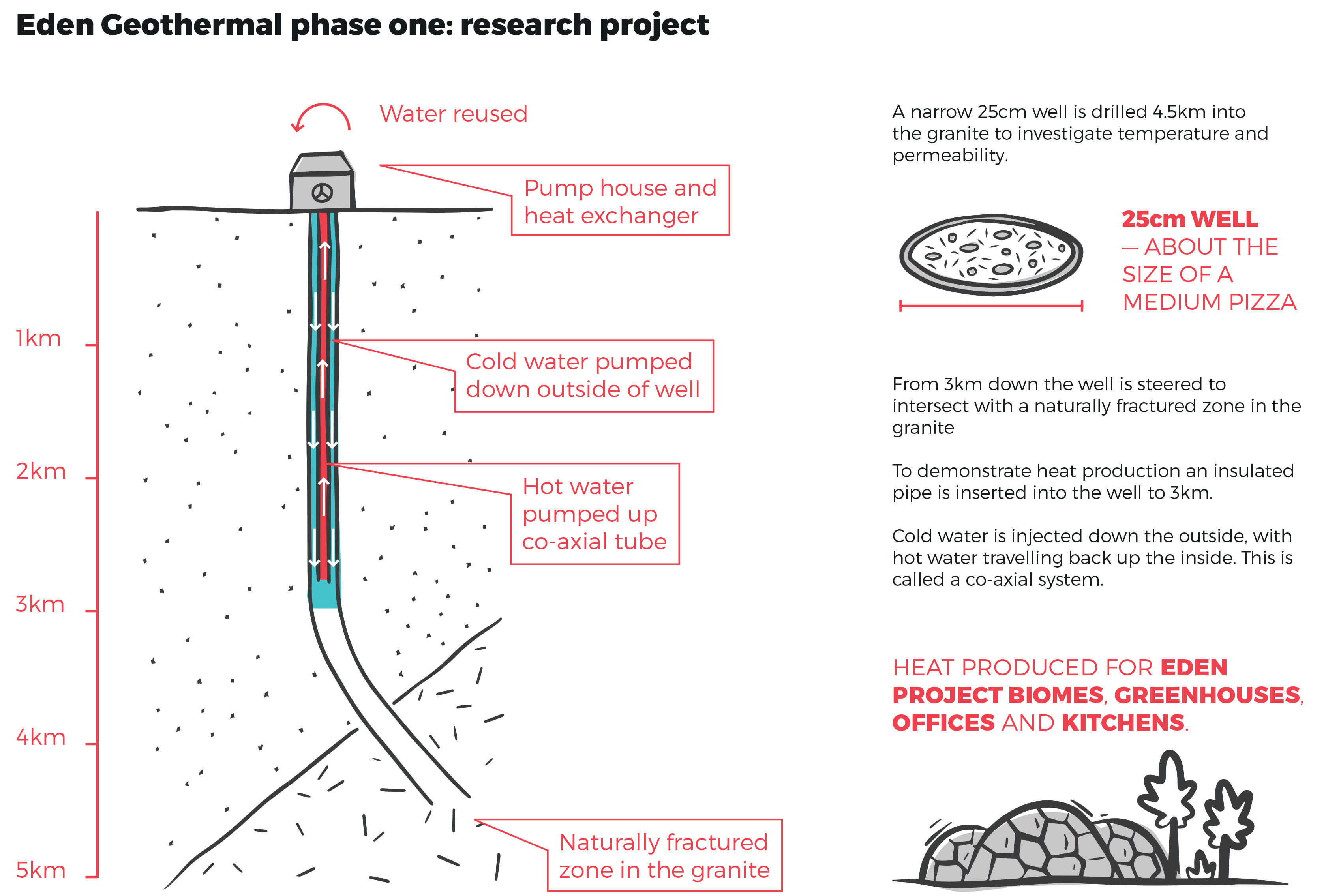 Over sixty delegates from the pri…

Built to Last Start-Up Sessions: The Reality of Running Your Business