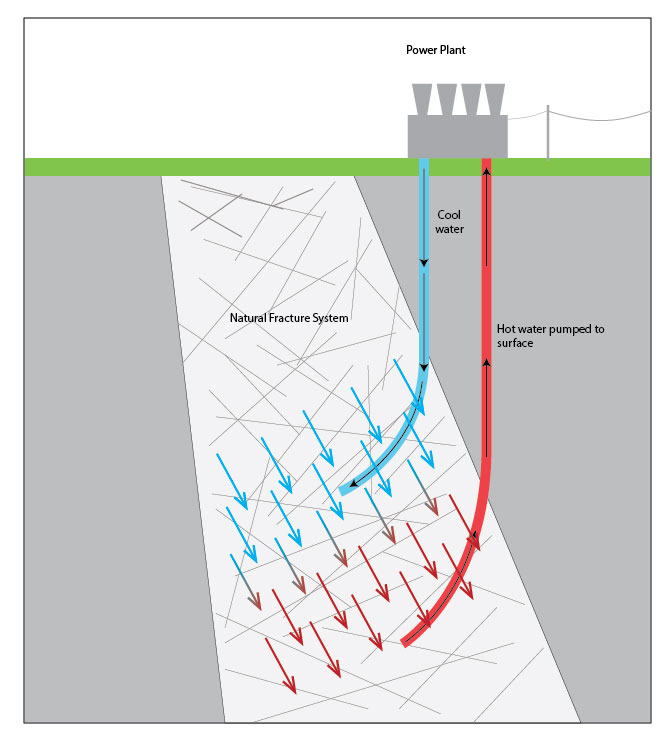 An investment from the European Regional Development Fund (ERDF) worth up to £10.6m will enable a revolutionary geothermal venture at United Downs near Redruth in Cornwall.  The United Downs Deep Geothermal Power project, which is the first of its kind in the UK, will explore the geothermal resources at depth and hopes to use the energy to drive a demonstration power plant supplying electricity to the local grid. This exciting project will be led by Geothermal Engineering Limited (GEL).

Geothermal energy is heat from the earth. The granite that lies beneath Cornwall is heat-producing and the rocks here are hotter than anywhere else in the UK, making it the best place to extract energy for both heat and power.

To unlock the potential at United Downs two boreholes (called ‘wells’) will be drilled, one 2.5km deep and the other 4.5km deep. The deeper of the two wells would be the deepest onshore hole in the UK. Water will be circulated between the wells, collecting heat from the rocks, before being brought to surface at a temperature of about 1750C and being fed into the demonstration power plant. The plant will generate 1MW of clean renewable electricity, which is enough to meet the electricity needs of about 1,500 households.

A history of geothermal in Cornwall

Cornwall has a long history of developing industries to exploit the resources beneath our feet.  The landscape still has many reminders of the mining industry and the skills and expertise developed here were exported around the world. From the late 1970s to the early 1990s Cornwall was at the forefront of research into Hot Dry Rock geothermal energy. Researchers at Rosemanowes Quarry near Penryn developed techniques for developing deep geothermal reservoirs in very hard rocks which were applied at many other sites around the world. The United Downs project represents a welcome return of geothermal research to Cornwall.

GEL project manager Peter Ledingham, himself a graduate of the Camborne School of Mines and a member of the Rosemanowes Quarry team, said: “Cornwall has the best geothermal resources in the country but we have yet to press home our competitive advantage. By drilling and testing the deep wells at United downs we hope to prove the quality of the resource and demonstrate the viability of generating renewable electricity from it. The project therefore offers significant potential for economic growth in Cornwall and Isles of Scilly, building on its reputation as a ‘green and marine’ region.”

Julian German, Deputy Leader of Cornwall Council said: “I am very excited about this announcement. This is a great opportunity to utilise the unique geology we have in Cornwall and presents a chance to lead a new emerging sector.  Deep geothermal heat and energy could be a game changer for energy costs to both residents and businesses and help us eliminate fuel poverty in Cornwall.”

Bob Egerton Cornwall Council Portfolio Holder for Economy and Culture, said: “Climate change is the biggest threat facing mankind. We live in societies where we consume large quantities of energy as part and parcel of our lifestyles. It is imperative that we develop renewables to wean us off our dependency on fossil fuels. For many years, geothermal technology has been trialled but not brought to fruition. Now we have an opportunity to take the technology to the next stage and hopefully realise its full potential in producing clean energy and, at the same time, creating highly skilled jobs in Cornwall.”

Mark Kaczmarek, Cornwall Councillor for Carharrack, Gwennap and St Day, said: “My working background is in mining here in Cornwall and I have first-hand knowledge of how hot some places can be at depth. This is great news and a very exciting project for United Downs Gwennap and will be the first of its kind in the UK supporting skilled employment. This will once again put Cornwall on the map of innovation. If successful the geothermal energy produced could supply a significant amount of renewable energy for local residents and businesses and will be an asset for the local area.”

The drilling will begin in early 2018 and take about 6 months.  Testing the wells, characterising the geothermal system and installing the power plant will take a further 18 months, with a target commissioning date in early 2020. If this pilot project is a success, it will be a catalyst for further investment in Cornwall and the Isles of Scilly with the potential to develop a new geothermal industry in the county.

The project includes investment from Cornwall Council (£2.4m) and the private sector (£5m).

The project is receiving up to £10,599,998 of funding from the England European Regional Development Fund (ERDF) as part of the European Structural and Investment Funds Growth Programme 2014-2020.  The Department for Communities and Local Government is the Managing Authority for ERDF. Established by the European Union ERDF funds help local areas stimulate their economic development by investing in projects which will support innovation, businesses, create jobs and local community regenerations.  For more information visit https://www.gov.uk/european-growth-funding