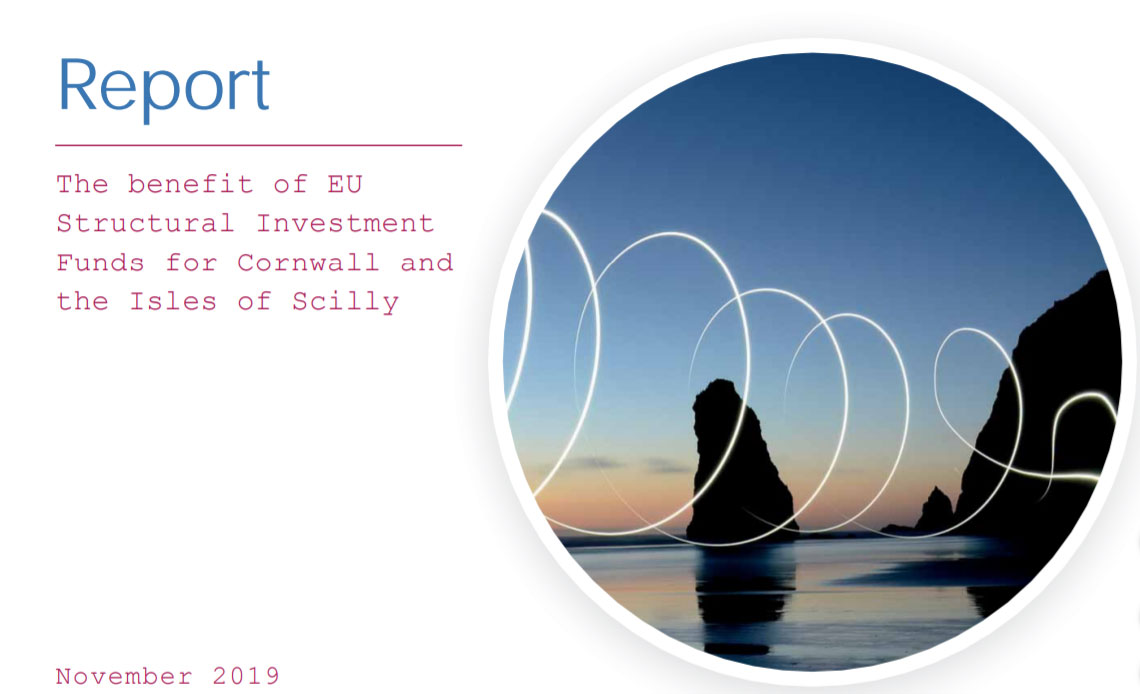 As EU funded projects are continuing to deliver support to businesses, social enterprises and individuals across Cornwall and Isles of Scilly (CIoS) until 2023, independent research has confirmed the positive local impact of EU investments in Cornwall over the last 20 years. The research commissioned by the CIoS Growth Programme, the European economic regeneration programme for the region, provides evidence of the benefit brought by the EU funds to CIoS in comparison to other UK regions.

The report states that CIoS performed the best out of eight UK comparator regions, with the highest increase in employment, the number of scale ups (fast growing businesses) and working age population with NVQ level 4+ qualifications. Cornwall appeared second in terms of overall growth in GVA, third for increase in average earnings, the number of hi-tech knowledge intensive businesses and in working age population growth.

The report, which is publicly available here, was conducted at the end of 2019 by independent company Ash Futures and shows that the EU funds had ensured skills and earnings improvements and supported major developments. These include the Combined Universities of Cornwall, the building of new modern workspaces such as three innovation centres and the Enterprise Space for Advanced Manufacturing (ESAM), a transition to low carbon through renewable energy technology and storage, improved connectivity by spearheading the growth of broadband and supported sustainable economic growth and employment through tailored businesses and inclusive growth and skills programmes.

However, despite the relatively robust performance in skills development, economic growth and employment levels, the report states that deep-rooted structural issues remain in terms of productivity and earnings growth, specifically for lowest earners in the post-recession period.

Using both qualitative and quantitative analysis, the research includes the benchmarking of Cornwall and the Isles of Scilly’s performance against a range of eight comparator areas, and an analysis showing how the CIoS economy might have performed in the absence of the EU Programme support. The report also includes wide ranging stakeholder interviews to capture and learn the lessons from these programmes of investment into economic growth.

Councillor Bob Egerton, Cornwall Council’s portfolio holder for Culture, Economy and Planning said: “The EU funds that Cornwall has benefitted from in the last 20 years have led to some significant improvements for the region. The investment has improved our transport infrastructure, our world-wide connectivity through broadband, but also enabled leading projects to take place and support Cornwall Council’s ambition of a more inclusive and sustainable region.”

Mark Duddridge, Chair of the Cornwall and Isles of Scilly Local Enterprise Partnership, said: “EU funding has laid the foundations for Cornwall and the Isles of Scilly to help lead the clean energy revolution and take advantage of growth sectors including space applications, geo-resources, agritech and the creative industries.

“This study shows that economic growth in Cornwall and the Isles of Scilly has been relatively strong and that EU funding has played a significant role. We’ve seen strong growth in jobs, scale up and knowledge businesses, and higher level qualifications thanks to targeted investment and local decision making. This is a model we hope will continue as part of the Government’s levelling up agenda.”

The region, which has been categorised as “Less Developed” with a GDP per capita below 75% of the EU average, has been receiving circa £1.5bn from the European Structural and Investment Funds Union since 2000 through three rounds of consecutive European Funded programmes

The research has been commissioned as the last phase of the EU funded Growth Programme is being rolled out. Seventy-four live EU funded projects are in delivery, with some of them continuing until 2023 to carry on the ambition to deliver smart, sustainable and inclusive growth across Cornwall and the Isles of Scilly.

Running until 2023, the Cornwall and Isles of Scilly Growth and Skills Hub has been specifically set up to help local businesses find the right support and training.  Operations Director Stu Anderson said: “The Growth and Skills Hub has benefitted from two rounds of funding from the CIOS Growth Programme, which has enabled us to further engage the business community. Since we started this project in 2016, our team has engaged with over 3000 businesses.  We have helped them to innovate and grow, guiding them through the support and training available in areas such as strategy, marketing, leadership and sales. We are delighted that SMEs and sole traders in Cornwall and Isles of Scilly are able to access support until 2023 and we want to encourage them to come and talk to us to fully benefit from the support available to them through the Growth Programme.”